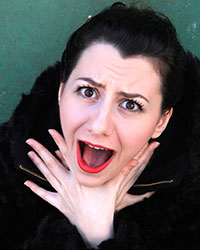 Many people suffer from an irrational and unreasonable fear of becoming ill or dying that is so strong it can actually bring on terrifying medical symptoms that seem entirely real. These fears, which come in a variety of forms, are often grouped under the catchall term “hypochondria,” and give a clear indication of just how much power the mind has over the body. Sickness and healing alike have a definite psychological component, and, just as a positive attitude can help fight disease, a negative mindset can leave human beings vulnerable to a whole host of debilitating health problems, real or imagined. But psychosomatic or not, the symptoms and feelings that hypochondriacs experience are authentic from their perspective. The anxiety they suffer as a result of their phobias can be especially debilitating, and they may make life choices that are not in their best interest simply to avoid having to face situations or circumstances that provoke their feelings of dread. Pseudodysphagia, or the fear of choking, is an excellent example of the type of hypochondria-related condition that can severely disturb normal functioning. People who are possessed by a persistent concern that if they eat solid foods they will choke and possibly die almost inevitably end up adopting very restrictive diets to protect themselves from trouble, relying on liquid or highly pureed foods that may be easily swallowed but are frequently lacking in many vital nutrients. Even beyond the nutritional inadequacies of such a diet, the human gastrointestinal system needs solid food inputs to operate properly and efficiently, and when people studiously avoid foods that are high in fiber or that stimulate or challenge the digestive process in some useful way, they may acutely compromise their overall state of health.

Sowing the Seeds of Fear: When Perception and Reality Diverge

Pseudodysphagia is a disorder of false perception and belief that affects men, women, children, and individuals from all age groups without discrimination. Many times, the onset of the condition will coincide with a real choking incident, but this connection is far from universal. Rather than appearing all at once, pseudodysphagia tends to develop progressively, as the victim becomes more and more preoccupied with the thought that swallowing can lead to choking, until these concerns become a constant presence whenever food is being consumed. In these situations negative internal feedback can gain an unstoppable momentum, as initial glimmers of fear gradually escalate into an inescapable and overwhelming obsession.  As the hold this choking phobia has on the mind of its sufferers deepens, anxiety will eventually become strong enough to bring on (real but imagined) psychosomatic choking symptoms, providing all the evidence that a person in the grips of pseudodysphagia needs to validate his or her darkest fears and turn a previously nascent condition into a full-fledged life-altering mental illness. People who develop pseudodysphagia almost invariably suffer from other mental health troubles, including depression, anxiety disorder, panic disorder, and generalized hypochondria. Because the obsessive fear of choking emerges from within this nexus of dysfunctionality, it should not in most cases be viewed as a stand-alone disorder, but rather as a symptom of a subconscious mindset plagued by insecurity, low self-esteem, and persistent anxiety. Basic existential discomfort and feelings of alienation can manifest in a broad variety of puzzling and surprising ways, and even when pseudodysphagia can be traced to a real choking incident, the disorder still depends on a deeper level of maladjustment to support its progressive development.

Before anyone is diagnosed with pseudodysphagia, it is necessary to eliminate any possible organic conditions that might be causing actual choking symptoms. Dysphagia, minus the pseudo-, is a legitimate health problem that can cause constriction of the throat during swallowing, and those who suffer from this condition are not imagining the symptoms they report. Additionally, there is also a rare muscle condition called Omophydroid Muscle Syndrome that many believe may be causing some to be falsely diagnoses with pseudodysphagia. The omophydroid muscle is located at the front of the neck, in the vicinity of the clavicle and the scapula, and when it becomes chronically sore, it can make swallowing extremely painful. Because this condition is hard to detect, there is no telling how many people have been incorrectly assumed to be suffering from a choking phobia when in fact their omophydroid muscle was actually the source of the discomfort. There is no standard treatment for pseudodysphagia. Because it tends to co-occur in combination with other mental health disorders, most therapists recommend a comprehensive, multi-pronged treatment program for those who suffer from a choking phobia. The assumption is that if deeper psychological issues can be addressed first, pseudodysphagia will be much easier to counteract later on with talk therapy and retraining strategies that focus on helping the patient learn how to relax while eating. Pseudodysphagia sufferers have responded well to this treatment approach, and there is no doubt that the chances for a swift and complete recovery will be enhanced if a person with an obsessive fear of choking gets into therapy as soon as possible once the disorder appears.